Global Lynk reports that recent pre-commercial testing on its fifth satellite in orbit has connected the satellite to thousands of unmodified devices, including cellphones and IoT devices.

Lynk said in a press release on Tuesday that the tests were carried out in five countries – the Bahamas, Canada, New Zealand, the United Kingdom and the United States – connecting to mobile phones from eight of the 10 major mobile network operators in the world. The satellite connected to 6,000 devices including smartphones, tablets, IoT devices, cars, trucks and even tractors, enabling direct two-way connectivity.

CEO and co-founder Charles Miller said By satellite these tests have been significantly improved over previous tests conducted by Lynk. They further validate Lynk’s satellite-to-cell technology, demonstrated for the first time in early 2020.

“We were registering hundreds of devices of all different types,” Miller said. “For the first time ever, MNOs were able to participate in sending and receiving. Independent third-party observers texted to and from space on their own phones.

The company describes its technology as tricking a cell phone into thinking it’s a cell tower. The satellite is equipped with a cell tower software stack. When in commercial service, it will operate as a roaming service,

Miller said the tests revealed bugs and quirks in the software, which the company is updating for its sixth satellite, which is expected to launch in April.

To bring its service to market, Lynk partners with MNOs and will operate as a roaming service when devices are outside of cellular coverage range. Lynk has signed contracts with seven MNOs, including Aliv in the Bahamas, Telecel Centrafrique in the Central African Republic and Unitel in Mongolia. More partnership announcements are forthcoming.

Miller said Lynk is actively in discussions with several large US MNOs, some of which have tested on his network. “There is real interest in what we are doing,” he said. 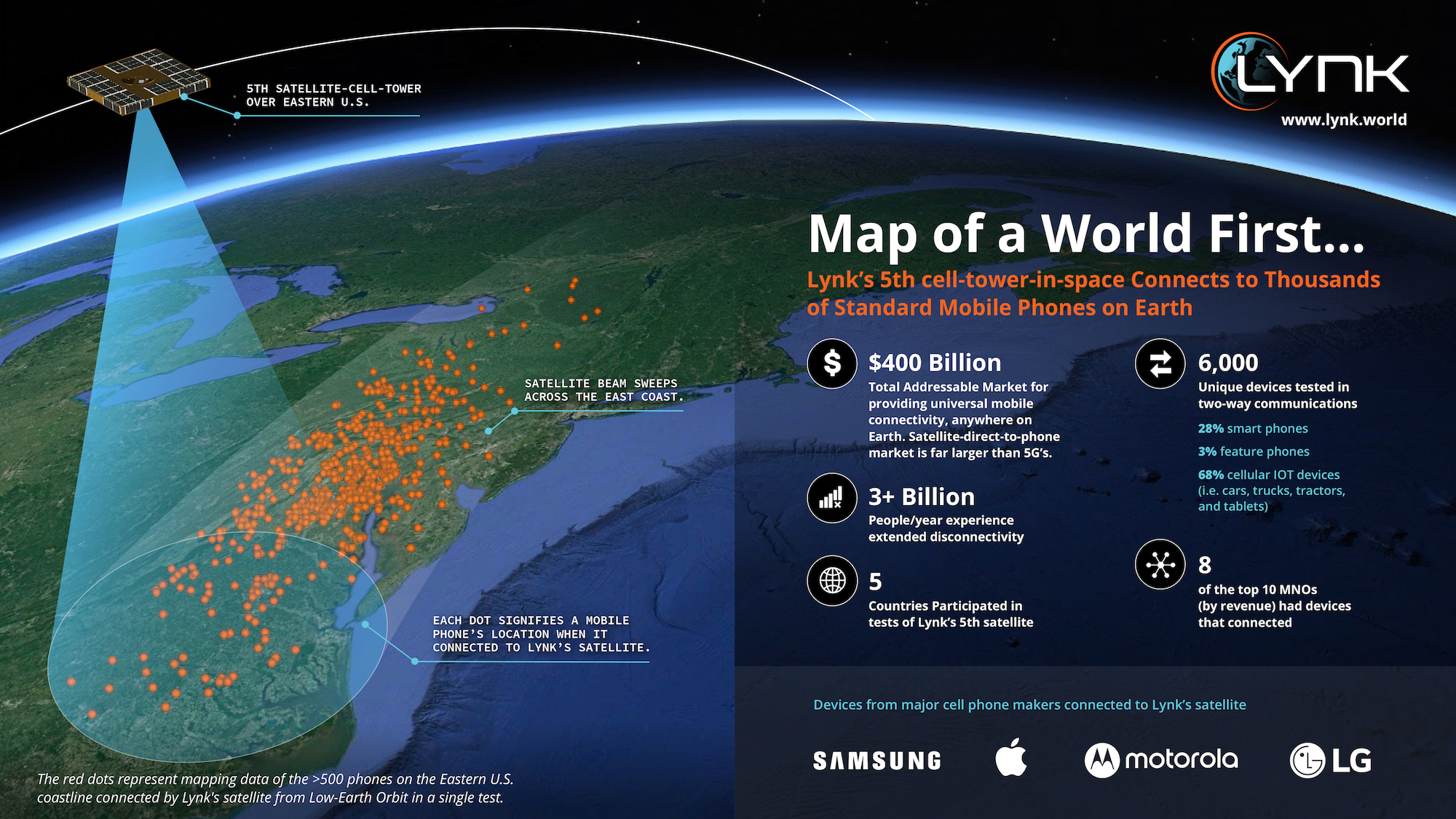 Lynk posted this graph on its recent satellite tests.

Lynk is awaiting a global operator license from the FCC after completing the comment period for its license. Since Lynk will be using MNO spectrum in the countries it operates in, Miller said it was mandatory for MNOs to monitor interference testing, and they did not report harmful interference.

The company plans initial commercial services later this year with emergency alerts and messaging backup services, which it can offer with its current in-orbit capabilities. Miller plans to increase the service’s bandwidth levels as Lynk adds satellites, eventually reaching around 5,000 satellites and broadband service for cellphones.

Miller pointed out that Lynk was initially targeting service with MNOs due to spectrum requirements, but the technology would be a natural fit for a partner like a vehicle security system or farm equipment.

“Cars come off the assembly line with built-in cell chips. We connected to cars with the cellular chips built into the car. LoJack and OnStar don’t work if you don’t have a cellular connection. Now they’ll work everywhere, no changes to your car,” Miller said. “When we sign a contract with a major MNO in the United States, then we are in an ideal position to approach American automakers and tractor manufacturers and [offer connectivity.]”